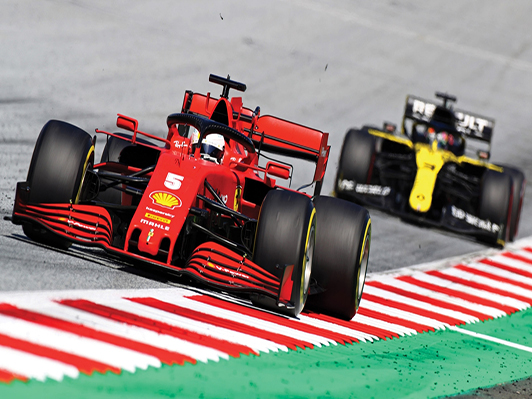 What Can Legal and Compliance Programs Learn from the Fastest Sports Teams on the Planet?

Have you ever heard a colleague complain that controls, compliance and governance are just slowing the business down? That somehow these are obstacles to growth and we ultimately need to choose between one or the other?

That’s not the view taken by some of the most successful (and the fastest) sports teams in recent years, including the Mercedes Formula 1 Team and the British Olympic Track Cycling Team, who have embraced certain principles based on controls, marginal gains and a no-blame culture to enhance their performance.

There are some interesting parallels we can draw from the approach taken by those who go fast, to compliance programs and how we can help promote sustainable growth.

Prioritizing a System of Controls

The famous racing driver Mario Andretti once said “It’s amazing how many drivers, even at the Formula 1 level, think that the brakes are for slowing the car down”. This can seem counter-intuitive at first, but what he meant is that it’s the brakes that let you control the car and it’s the brakes that allow you to go fast. The two go hand in hand.

In the workplace, it is our system of controls that acts as the brakes. Controls are everywhere – most businesses operate hundreds, if not thousands of them across all areas and they might be automated or manual. With the right focus, and with a system in place to regularly test their effectiveness, strong controls enable us to improve the experience for our customers, reduce inefficiencies and waste and gain the trust of our partners and stakeholders.

Taking a proactive approach to risk and controls and by embedding in all staff a sense of accountability for their controls, will lay the foundations to make us more competitive and grow faster, not slow us down.

The Mercedes F1 Team famously adopts a team “no blame” culture, based on being proactive and calling things out when they’re not right. Everyone in the team is accountable to the collective – ie the overall goal of winning races. And they combine this shared commitment with a no blame culture

In Monday morning meetings they start with what mistakes they made over the weekend to get them out, and it means that people can say what they need to, when they need to. As they say “We don’t blame individuals. We blame problems”.

Removing blame from the equation can be a key component of the right compliance reporting culture. Staff need to feel empowered to raise issues early and without retaliation, safe in the knowledge that senior management is not going to shoot the messenger. Better still, if an environment can be created that actively encourages self-identification and resolution of issues then that culture of continuous improvement can be taken to another level and become a competitive advantage.

Prior to 2008, the British Track Cycling Team had won one Olympic gold medal in 100 years. At the next two Olympics they won a total of 14 gold medals and dominated the event. A large part of this was based on an obsession with learning from every mistake and searching for tiny margins of improvement in everything they did, the so-called marginal gains theory.

It’s the idea that if you broke down everything you could think of that goes into racing a bike, and then improve each one of those components by just 1 percent, you’ll see a huge increase when you put all those things together.

So what did that look like at Team GB?

They did things like hiring a surgeon to teach their riders the best way to wash their hands to reduce the chances of getting a cold. They did research on the exact type of pillow that led to the best night’s sleep for each cyclist and took those pillows all around the world to each race. They even painted the inside of the team truck white, which helped them spot tiny bits of dust you wouldn’t normally notice, but could affect the performance of the bikes.

As they racked up these and hundreds of other small improvements, the results came faster than anyone could have imagined. It became an obsessive and a passion and part of the culture of the team.

The same can apply just as much to continuous business improvement and for your compliance framework. Every one of us could probably name 5 things off the top of our head that could be slightly better – processes, controls, the way we do things.

The individual impact of those 5 issues might not be huge – maybe it impacts one or two customers, maybe a small operational loss, maybe a few hours slippage time on a process – not enough to make a material difference to our success. But if you add up everyone’s 5 issues across our end to end business model, as time goes on these small improvements compound. Instilling this culture of root cause analysis and continuous improvement, leads to transformational change.

So as Al Pacino, playing the inspirational football coach in Any Given Sunday put it, “You find out life’s this game of inches. So is football. The inches we need are everywhere around us. And we know when we add up all those inches that’s gonna make the [*%!] difference between winning and losing!”