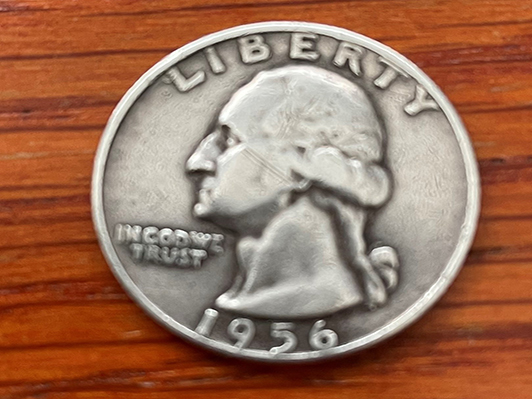 There’s a quarter sitting on my desk. It’s been there for over a year at this point. It’s a problem quarter.

How did it get there? One day I took a bucket of change to the Coinstar machine to get all those coins turned into an Amazon gift certificate. While the machine was happy to gobble up all the other quarters, dimes, nickels and pennies, it wanted nothing to do with that one quarter.

I couldn’t figure out why at first, and then I noticed it’s from 1956, which makes it one of the rare things in my life that is actually older than I am.

I figured it must be different enough from modern quarters that the machine rejected it. So, I put it in my pocket, figuring I would just spend it in a parking meter.  But then, on the way home, I thought to myself, “I wonder if, given its age, it may be worth something?”

So, I did a quick search on the internet and found out that it’s worth its weight in silver. As I write this, that’s about $4.60.

And that’s my problem.

The quarter is worth far too much to be used as just a quarter, but it is also worth far too little for me to drive out of my way to find a pawn shop or coin store and then listen to them tell me, “Oh, no, it’s only worth a quarter” when I know it’s not. And even if they did give me $4.60 (or something close to it) I would probably spend that much in gas just getting there and back, which, coincidentally, costs just a little less than $4.60 a gallon here in Los Angeles.

So the quarter sits on my desk, and I now get to the point: when developing and managing a compliance program try to avoid having 1956 silver quarters. Try to avoid having elements of it that you are too invested in to just pull the plug on, but not valuable enough to make a difference.

Now, no one tries to have a piece of their program that falls into that category, but we all end up with them. Maybe it’s a training module that is a bit out of date but would cost too much or take too much time to update. Maybe it’s a procedure that doesn’t quite work but doesn’t work so badly that it’s a crisis.

It’s easier to just let it sit there. The problem is that strategy can carry with it great risk, as, for example, the IT world has seen far too often. Legacy computer systems are kept because they seem too expensive to replace, until a hacker capitalizes on their vulnerability and causes damage far greater than the price of updating the system.

There is also a far less dramatic but very real risk for compliance programs to consider: When employees see something that is clearly out of date, halfway done, or just not what it should be, it can communicate that the company really doesn’t care about it. If it did, it would spend the money to do the job right. That’s an impression the compliance department can’t afford to give.

So look around your compliance program and see if you have any old quarters lying around. Then do what I am too lazy to do: just get rid of them.