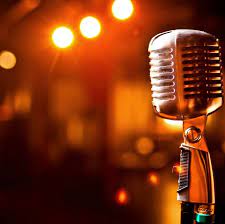 You’re standing on a stage, the spotlight flooding your senses, a heavy microphone in your sweaty hand. The words to a song you barely know are running much too quickly across a screen, and several hundred people are staring at you. You raise the microphone to your lips and open your mouth to sing–and at that moment, you wake up!

For some people, standing on a stage and singing alone feels like a nightmare. For others, performing in front of an audience is great fun. What makes the difference? You might think that it’s just a matter of talent. After all, we tend to think of singing as a gift given to a chosen few. But you may be surprised to find out that with guidance and practice, most people can learn to sing on pitch and with a pleasing tone. And no level of talent can prevent people from experiencing stage fright; Rihanna, Adele, and Barbara Streisand are just a few examples of celebrities who reported feeling performance anxiety.

So if it’s not just about talent, how do some people become so comfortable performing in front of others? The answer is deceptively simple: they practice. And they don’t just practice in a safe and secluded space. Experienced musicians get out there and perform so many times that they can override their body’s natural reaction to fear. When you are in a situation that your brain thinks is dangerous, it causes an acute stress response, creating physiological changes in your body to prepare you to deal with the threat. Your muscles tense, preparing you to run. Your breathing gets shallow and fast. While these responses were originally intended to protect us from physical threats, our brains employ this protocol for psychological threats too. And for most people, performing in front of an audience feels like a threat!

For many managers, thinking about having a difficult conversation with their direct reports can bring on an attack of stage fright. When an employee tells their manager that a high-profile donor sexually harassed them at a fundraising dinner last night, they might freeze, or blurt out the wrong thing. Compliance professionals know that direct supervisors play a vital role in the reporting of misconduct, and that if managers aren’t equipped to handle those difficult conversations, important opportunities can be lost. How can we train managers to listen well and respond appropriately when their employees disclose misconduct to them? Much like singing or playing an instrument, what it really takes is practice. Instead of throwing another training video or presentation at your managers, consider borrowing some ideas from the lives of professional musicians for your next workshop or training session.

Practice makes perfect (or at least, prepared). A musician who only ever sings to an empty room might be surprised the first time they sing in front of a crowd and feel the way their body reacts. If your managers haven’t actually put themselves into a tough conversation and practiced what they’ll say, they may come up short in the moment. For your next training, consider putting supervisors into pairs or small groups and giving them role-playing exercises, acting out situations in which someone discloses a policy violation to them and they have to respond. To up the stakes, have them take turns playing out the situation in front of the rest of the room–and invite them to notice their physiological reactions to that “on the spot” feeling.

Teach managers to pay attention to their own bodies. Think back to a time when you felt stressed: maybe you had to give a presentation in front of an important audience or were called out during a team meeting. Did your legs get shaky? Did your chest constrict? Invite managers to identify how their own bodies react to stress, and then guide them through ways to counteract it. Practice some deep breathing techniques as a group, designed to get the heart rate down and the body out of panic mode. Hand out stress balls with a quote about ethical leadership on them, or other small sensory items on which they can focus nervous energy if needed. Give them each an infographic of grounding questions or prompts that they can keep on their desktop to prepare for a difficult conversation, such as:

“Thank you for coming to me. I’m listening.”

“Can you tell me more details about what happened?”

“Thank you for sharing as much as you have. If you don’t feel comfortable telling me more, you can report anonymously via our Helpline. Here’s the website/number.”

“I will reach out to our CECO to ask for guidance, and I’ll get back to you soon on where we go from here.”

Treat past mistakes as an opportunity to grow. Failure is data. While our brains may perceive failure as a threat, every time we miss the mark, we have a chance to learn. Good musicians record themselves practicing and listen intently, mining for areas to improve. The best musicians expect to make mistakes and use them to become better. Either in small groups or as a written exercise, give your managers a chance to meaningfully reflect on a time when they didn’t get it right, and how they might respond differently in the future to act according to your organization’s values.

The average person might never sing on a stage in front of a crowd of thousands. But with enough practice, almost anybody could gain the confidence to get up during karaoke night and have a great time. Likewise, your organization’s managers don’t need to be professional investigators to handle sensitive conversations well. They need to be reassured that it’s okay to be human, that fear is a natural response to difficult situations, and that acting according to their values under pressure is a skill set they can build with confidence.