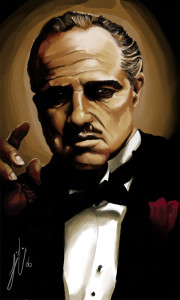 Few movies have been as widely viewed or as widely loved as The Godfather. A surprisingly large number of people, especially men I have worked with, can quote, or at least misquote, an enormous number of lines from the film: “I made him an offer he couldn’t refuse.” “Luca Brazzi sleeps with the fishes,” and my personal favorite “Leave the gun. Take the cannoli.”

This line gets used a lot in jest, but also when people are discussing business decisions. And there’s a great deal of risk there, starting with the presumption that because Michael Corleone said it in The Godfather it’s somehow a valid rule of business. As seductive as his character is, let’s not forget that he ran a criminal syndicate, which is not a business likely to win awards for its ethics and citizenship. Last I looked, they didn’t have a compliance and ethics program that met the standards in the Federal Sentencing Guidelines.

The idea that a decision is strictly business creates a dichotomy of ethics between that which is done in the course of business and that which is done for personal reasons. Put simply, “I can harm you if it helps my business so long as I wasn’t doing it just to harm you but only so I would make money.” It assumes that the collateral damage is not my responsibility.

It’s the kind of thinking that makes it easy to repackage subprime loans without letting others know how risky they are.

It also assumes that there are two moralities at play, with different thresholds for right and wrong. And, it suggests that some awful things can be done if there’s nothing personal about it, if it’s just a business decision.

To be fair there are times when a decision is just a business decision, even if there are enormous personal consequences to them. A factory may need to be closed, a department shut down, or a well-liked person who is not performing may need to be let go. Each has enormous impact on the people involved, and for them it is a very personal decision. But from a management standpoint, it’s truly strictly a business decision.

That’s likely a warning sign that this is precisely the time to get personal and to think through the ethical components, and to start asking some tough questions:

So, the next time someone says that a decision is strictly business, remind him, her or yourself, that the fact that they had to point it out, probably means it’s very personal.